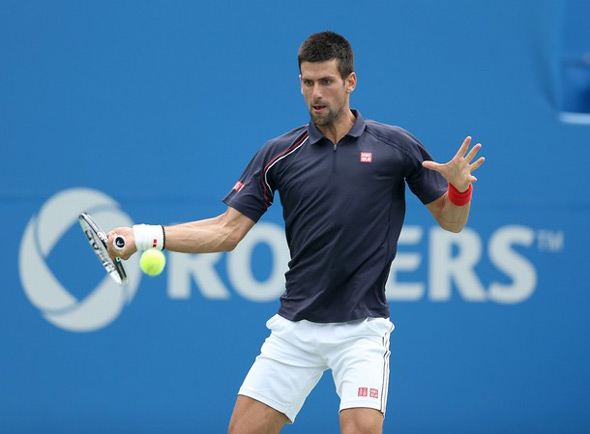 Novak is through to his tenth semi-final in 2012 after he played two matches in one day to make up for rain delays.

Top seed and defending Rogers Cup champion advanced to the semi-finals on Friday with a 6-3, 3-6, 6-3 win over world no.25 German Tommy Haas at the Toronto Masters.

Djokovic needed 2 hours and 32 minutes to seal quarter-final victory and to set up an all-Serbian last four clash with his friend and fellow countryman Janko Tipsarevic.

Novak made a break in the fourth game and took the opening set 6-3 in 54 minutes.

Haas fought back breaking in the second set to level the match at one set all.

Just like in the opening set, the 25-year-old Serbian star converted his break point opportunity in the fourth game of the decisive third set and held for 4-1. He needed to save a break point before taking his third match point for 6-3.

“Tommy is a great player. After years of injuries and surgeries, he comes back very strong, very fit, plays really well on faster surfaces. He made a couple really good wins here and he was on the roll, so it was a really tough match,” said Novak. “For me, it’s been a long two days… I don’t know how I found a way. I think I was fighting very hard, and that’s the positive of tonight’s match. That’s why I won, I think.”

Novak will enter into seventh meeting with Tipsarevic with a 4-2 H2H record and a 48-9 match record on the season (23-2 on hard).

On his semi-final with Janko, Nole said, “It’s never easy,  but we are professionals. We try to win the match whoever is across the net. We met first time probably 12, 15 years ago back in Serbia, and he was the best junior in the world and one of the players I was looking up to. I’m very glad that he managed to come to Top 10.  He’s playing probably the best tennis of his life in the last 15 months.”

Frenchman Richard Gasquet takes on American John Isner in the first semi-final of the day.