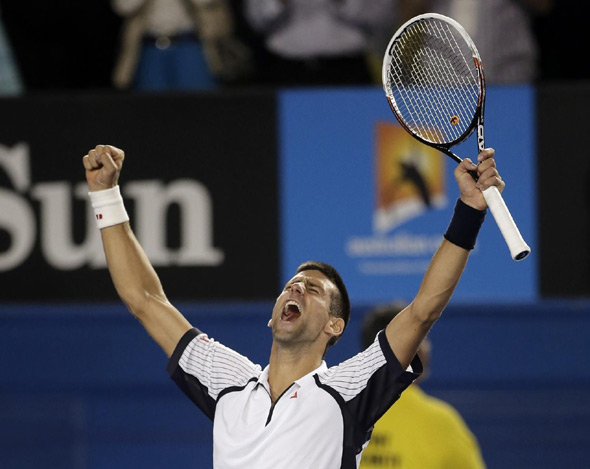 Nole powered into his fourth Australian Open semi-final on Tuesday!

After the five-set epic against Swiss Stanislas Wawrinka in the fourth round, Nole beat the Czech in exactly half the time, two hours and 31 minutes, and improved the career lead over Berdych to 12-1.

Novak stormed to a one-set lead in just 28 minutes, breaking his opponent in the third, fifth and seventh games.

Berdych made a break in the opening game of the second set, and though Nole had four break points in the tenth game, the Czech served it out 6-4 in 54 minutes.

The 25-year-old Belgrade native stepped up to the champion level that has won him five major titles and cruised through the third and fourth sets to seal his place in the last four of the first Grand Slam of the year.

“I tried to get the work done as fast and efficient as possible. I was very happy with the way I started the match. Very aggressive out there, going for my shots, which wasn’t the case against Wawrinka. So it’s a good improvement and very encouraging for next match,” Novak said in the post-match press conference.

“It’s not easy to always be at your 100% fitness. But after a five hour match two days ago against Stan, I was quite convinced I could recover for this one. The team did a great job.”

Djokovic won 11 of 13 points when he came to the net, and capitalised on six of his 14 break point opportunities.

Looking ahead to the Ferrer clash, Novak said, “I need to be aggressive on the court, that’s for sure. I need to step in and try to be in control of the match, otherwise he makes his own rhythm, he makes his own pace on the court. That’s where he’s very dangerous. He’s a great competitor.  He’s been playing the best tennis of his life in the last 15 months. It’s the semis of a Grand Slam, so I expect a tough match.”