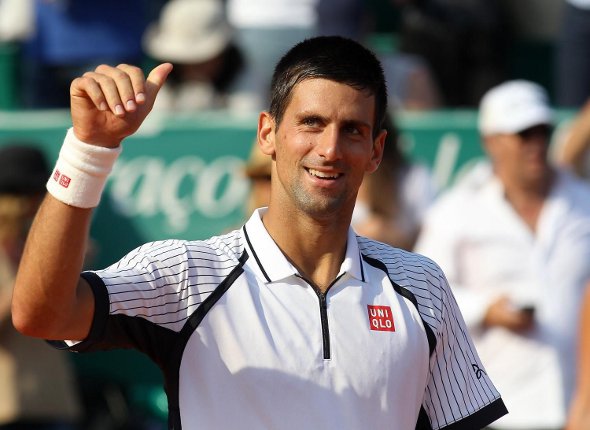 Serbian world no.1 Novak Djokovic reached the Monte-Carlo Rolex Masters semi-finals for the fifth time on Friday as he blasted past Jarkko Nieminen of Finland in straight sets 6-4, 6-3 in 77 minutes.

After Nieminen saved four break points in the opening game of the match, he broke Novak in the second, but the two-time runner up broke back immediately and held for 2-2. Djokovic converted one more chance in the ninth game and closed the set 6-4 in 40 minutes.

Nole seized the momentum at the beginning of the second set. He made a double break and raced to a 3-0 lead. Each player broke twice more, with Djokovic wrapping up victory on his first match point.

“It was great,” said Novak. “Very solid from the back of the court. I played with the right intensity from the start of the match till the end. That’s a big step forward for me today comparing to the first two matches in every sense. I finally got a great feel on the clay. Hopefully I can maintain that level tomorrow.”

In the last four of the ATP World Tour Masters 1000 clay court event, the top-seeded Belgrade native will face no.32 Fabio Fognini on Saturday (15.00 CET).

The Italian reached his first Masters semis with a 7-6, 6-2 win over seventh-seeded Frenchman Richard Gasquet.

“I have to be prepared for quality rallies,” Djokovic said about the upcoming challenge. “He’s a player who has won against some top players here, a player who feels good. He is going to have nothing to lose and will be motivated to play well in front of his Italian supporters that are many here.”

Eight-time defending champion and no.3 seed, Spaniard Rafael Nadal, takes on sixth-seeded Frenchman Jo-Wilfried Tsonga in the first semi-final of the day (13.00 CET).