Novak cruises to second round in Dubai 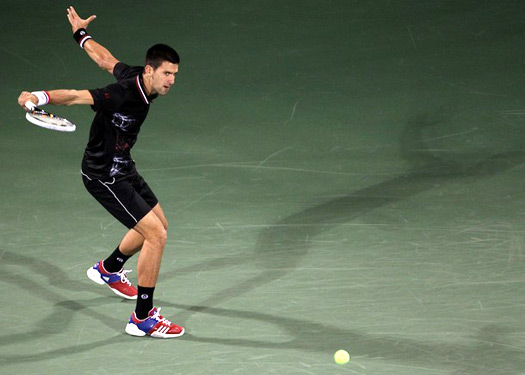 Nole started quest for his fourth successive Dubai title with a straight sets victory over world no.72 Cedrik-Marcel Stebe at the Dubai Duty Free Tennis Championships on Monday.

Novak secured an early break of serve and took the opening set 6-4.

He broke his opponent’s serve twice in the second set, in the fifth and seventh games, and served it out 6-2.

“He definitely played well,” said Novak after the match. “I was impressed with his game, especially in the first set. It could have gone a different way really, because he was returning well. He went on the court wanting to win, and that’s the right attitude, I think.”

“I was really happy throughout the whole match the way I played. I really didn’t have many downs in the game. He made me play it. He gave me good rhythm and went for his shots and made a lot of winners. Credit to him. I’m happy with the first match after four weeks definitely.”

This was Nole’s first match since winning his fifth Grand Slam title at the Australian Open with the epic victory over Rafa Nadal in 5 hours and 53 minutes in historic final. Defending his Dubai crown, the Serbian star is confident he can replicate the success he’s had in previous years at the event, which has seen him win the past three trophies.

The 24-year-old Belgrade native now has a 21-2 career mark in Dubai.

He will next face no.74 in the ATP rankings, Ukraine’s Sergiy Stakhovsky, who outplayed Omar Awadhy from United Arab Emirates 6-1, 6-2.

Novak won both their previous encounters, the last was in Rotterdam 2010.

Nole’s younger brother Marko, the youngest player in the main draw, lost to world no.133 Andrey Golubev of Kazakhstan 3-6, 2-6.

It was his first appearance in some ATP World Tour 500 event.