Novak falls to Wawrinka in US Open final 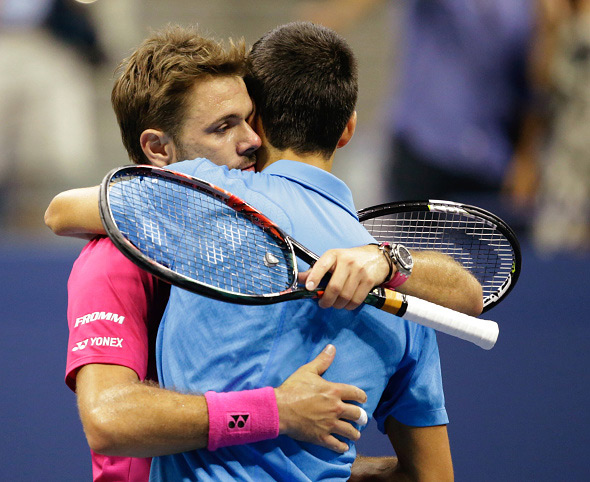 World no.1 Novak Djokovic failed in attempt to win his third title in New York, and his 13th career Grand Slam crown, when he lost to no.3 seed Stan Wawrinka 7-6 (1), 4-6, 5-7, 3-6 in the US Open final on Sunday. The match lasted six minutes short of four hours.

Novak started well, breaking Wawrinka in the second game, and consolidating for a 3-0 lead. Following a hold to love for 5-2, the Serb looked to wrap up the set two games later, but the Swiss raised his game and denied Nole’s bid to serve it out. The set proceeded to a tie-break, Djokovic took it 7-1 after 58 minutes.

Wawrinka broke for 3-1 in the second set when Novak double-faulted twice in that service game. The top seed capitalised on his break point chance four games later to draw level. However, his rival broke again in the 10th game to even up the match at one set apiece.

The Swiss raced to a 3-0 lead in the third set, benefiting from Novak’s unforced errors. Djokovic broke back and held for 3-all. He was serving to force a tie-breaker at 5-6, but surrendered his serve and Wawrinka took a two-sets-to-one lead.

The similar scenario happened in the fourth set, when the 31-year-old Lausanne native surged to a 3-0 advantage. He carried the momentum and confidence throughout the remainder of the match and clinched his third Grand Slam trophy.

The duo have faced each other 24 times, with Novak holding a 19-5 win-loss record, but the Swiss taking three of their past four Grand Slam meetings.

“Congratulations, Stan, to your team as well. You were more courageous player in the decisive moments and you deserve this title,” a gracious Djokovic said during the trophy ceremony. “It was a demanding match. He came on top, he was the better player, tougher mentally,“ added Novak. “It was a fantastic couple of weeks for me. A few weeks ago I didn’t know if I was going to come because I struggled physically. If someone had told me I was gonna play in the final I would’ve definitely accepted it.”

Novak was appearing in his 21st Grand Slam final (12-9 record), seventh at the US Open.

Having already won the Australian and French Open this year, the 29-year-old from Serbia was looking to capture a trio of majors for the third time (2011, 2015). He loses 800 ATP ranking points after failing to defend his title, with Andy Murray now 4,555 points behind.