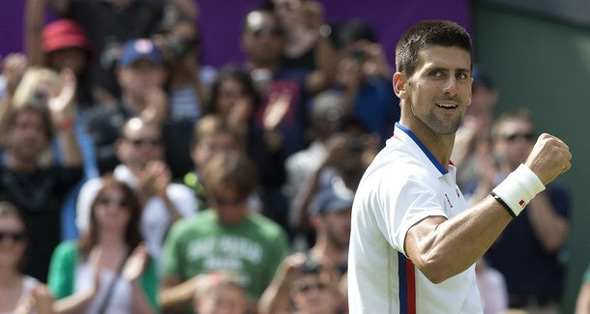 Nole is through to his second Olympic Games semi-finals!

Second-seeded Serbian, who is making his second appearance at an Olympic Games, converted 4 of his 13 break point opportunities and wrapped up victory in 80 minutes.

Djokovic was on form from the first shot. He was dominant in the opening set winning it 6-1 with a double break in just 32 minutes.

Tsonga had a better second set start. He had a 3-0 lead, but Novak broke back in the fifth game and held to level the result. The 25-year-old Belgrade native made a crucial break in 11th game and served out the set and match 7-5 to set up a last four clash with Andy Murray.

“I’m very satisfied with my game today,” Serbia’s medal hope said. “I was very sharp, very aggressive from the start. I think it was the windiest day I’ve played here in recent years… So I’m really satisfied that I managed to find a way to play well.”

Looking ahead to the match, Djokovic said: “Murray has been playing better than ever on grass courts. I will have to be at the top of my game.”