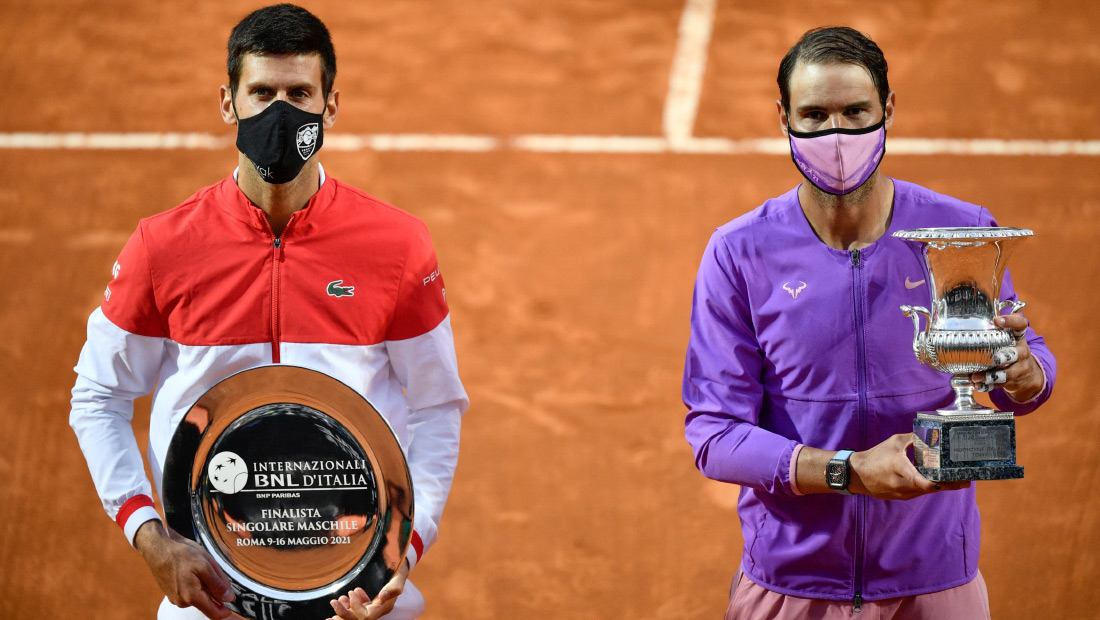 Novak with runner-up finish in Rome

Another outstanding week for Nole, who just fell short of the title in Rome after a great fight against Rafa.

The Serbian tennis ace failed in attempt to win a record-extending 37th ATP Masters 1000 crown. He finished runner-up at the Internazionali BNL d’Italia for the 6th time.

The two greats met for a record-extending 57th time and for the ninth time in Rome. It was their sixth championship match at the Foro Italico.

Like each of their previous five finals, this one was also a highly competitive affair, and a lengthy battle. The championship match lasted two hours and 49 minutes.

Novak opened well to take a 2-0 lead, but Rafa broke straight back. Nadal’s superb serving (84% first serves to 62% by Novak) was key difference in the remainder of the first set. Novak’s level fell off as the set progressed. The Menorca native broke for 6-5 and converted set point to win it 7-5.

Djokovic served better in the second set. Nadal had a break point at 1-1, but Nole’s big first serves got him out of trouble. The world no.1 broke his biggest rival twice, winning five straight games to level the contest.

Novak held two break points at 2-2 in the final third set, but missed his chances. It was the momentum changer. Nadal raised his level in the next game and broke to love for a 4-2 lead. He used his second championship point to close out the battle.

“I was a bit unfortunate not to use some opportunities, but we played three hours of high quality tennis,” Novak said. “Nadal was the better player in the decisive moments, but I have a lot of positives to take away from today. Last few days were a confidence booster for clay, I’ve found the game. I have to keep it and peak in Paris. Going into Paris I have good sensations now, I feel like I am playing the way I want on clay. Hopefully I’ll be ready to rock n roll in Paris and to go all the way.”

Novak will next head to Belgrade, Serbia. The Belgrade Open, an ATP 250 tournament (May 22-29), will be his last clay court competition ahead of the second Grand Slam event of the season, the Roland Garros (May 30-June 13).