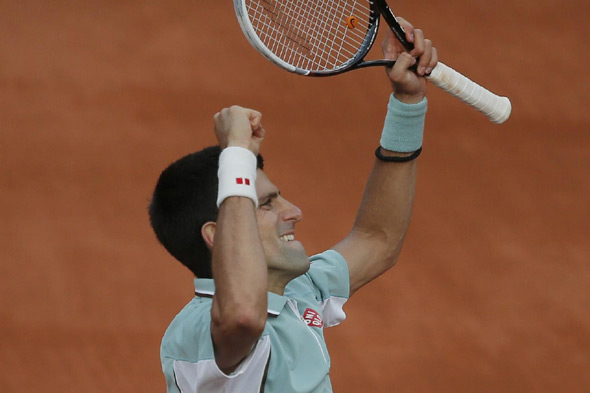 World no.1 Novak Djokovic is through to the Roland Garros semi-finals for the third year in a row after dismissing no.12 seed German Tommy Haas in straight sets 6-3, 7-6 (5), 7-5, on Suzanne Lenglen Court on Wednesday.

Nole controlled the 30-minute opening set. He broke Haas in the seventh and ninth games for 6-3. The 26-year-old Belgrade native dictated the baseline rallies, hitting 14 winners.

The second set was a much more competitive affair. Djokovic had a 2-4 deficit in a tie-breaker, but managed to win five of the next six points to win it 7-5.

Players exchanged breaks twice in the third set, before the 2012 runner-up broke his opponent once again in the 11th game and closed the set and match at second attempt.

“I’m just thrilled to get through,” said Djokovic. “It was a good performance for me in general. On the important points I came up with some good shots, but I could have done better. It was quite different conditions from center court. It’s very slippery. It’s very fast. Very difficult to control the ball, compared to center court.”

Novak won 82 percent of his first serve points and capitalised on five of his 12 break point opportunities in a 2 hour 13 minute contest.

The six-time Major champion is one step closer to fulfilling his hopes in Paris.

He will face no.3 seed and seven-time French Open titlist Rafael Nadal on Friday in a rematch of the 2012 final. The Spaniard crushed Stanislas Wawrinka 6-2, 6-3, 6-1.

Rafa leads their H2H 19-15. Novak won their last encounter in the finals of the Monte-Carlo Rolex Masters 6-2, 7-6(1), ending the Spaniard’s reign of eight consecutive titles.

Looking ahead to the Nadal clash, Novak said: “It’s a big challenge, and I’m ready for it. I’ve been playing well. It’s the biggest challenge at Roland Garros, no question about it. I’m sure that it’s going to be quite a good match. I need that necessary intensity from the start. I need to play on top of my game throughout the whole match, because that’s what it takes to win against him. It’s the small details and a few points that can decide a winner. That’s why I need to be very disciplined and focused in order to get emotionally, physically, and mentally ready for that match.”

It will be Novak’s 12th successive Grand Slam semis. He is bidding to become the eighth man in history of tennis to complete the career Grand Slam of all four Major titles.